I have for some time been having problems with the regular backup function of the team foundation server. The error was related to some xml-error that was quite strange to me. 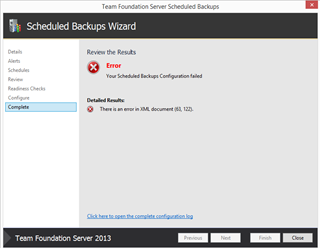 It turns out the issue was that the system writes a dictionary of existing backups present at the backup location (where the files are copied to). In that location, a file exists called Backupsets.xml. In my case, opening that file certainly proved it was corrupted (invalid XML).

So what to do…? As I did not want to edit this file by hand as it is all sorts of GUID references to stuff, the thing that made it work for me was to actually delete quite a number of the backups from disk and regenerate/setup the backup schedules from within the Team Foundation Server Administration Console. Before you say – “hey, that kind of contradicts the whole idea of having backups?”. Yes – that is correct, but as I’m running full backups on a daily basis that’s not a problem for me. I can always restore the databases to any day of the week as this full back is running daily.

Email ThisBlogThis!Share to TwitterShare to FacebookShare to Pinterest
Labels: TFS